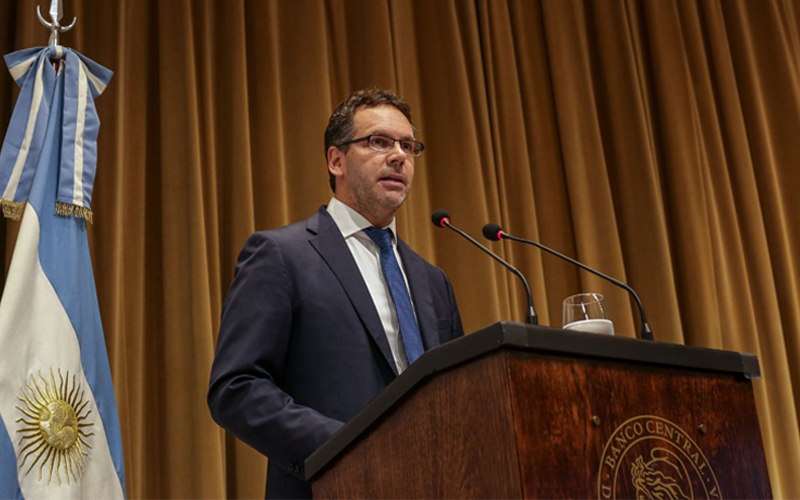 March 14, 2019. At the press conference held on March 14, the BCRA's Governor, Guido Sandleris, remarked the progress made in the implementation of the monetary scheme and talked about the BCRA's outlook on inflation.

The full speech was as follows:

Good afternoon. Thank you all for coming today. I have invited you here to talk about inflation and to announce some measures that will be adopted in that respect. These measures will let us help to tackle an issue that affects us all.

The BCRAs main objective is to reduce inflation. The National Institute of Statistics and Censuses (INDEC) has just released Februarys inflation rate of 3.8%, which is still too high.

We understand the sense of frustration experienced as a result of Februarys inflation. We are aware of how price rises affect people, especially the most vulnerable sectors of the population.

The current monetary scheme, which will be reinforced with the measures I am about to announce, seeks to bring inflation down on a permanent basis. However, full-fledged disinflation processes take time and call for consistency and perseverance.

We implemented this monetary scheme almost six months ago amid huge nominal volatility. Let us all remember that the peso lost half of its value in 2018 and that inflation hit a monthly high of 6.5% in September.

The scheme has let us put that peak of instability behind. Just as we promised, we have achieved the monetary base target every month. Whats more, yesterday's monetary base amounted to 1.26 trillion pesos, slightly below the figure recorded at the beginning of the new scheme in October. In other words, there are fewer pesos out there, and this reduces the pressure on inflation. But inflation remains high.

This does not mean that the scheme is not working. Actually, the scheme does work, and inflation will go down this year. However, disinflation is not a linear process, especially in the face of readjustments in relative prices and residual effects of last years shocks. This largely explains what has happened to prices in the first months of the year.

In February, three factors should be highlighted:

i. A 4.2% increase in regulated prices without which inflation would have amounted to 2.9%.

ii. An average increase of around 10.3% in the price of meat as a result of the livestock cycle after last years drought.

iii. The recovery in margins in some sectors. A sign of this phenomenon is the difference between wholesale inflation (0.5%) and core inflation (3.2%) in January. The recovery of these margins, which had fallen during the crisis we experienced in 2018, may be a sign of an incipient recovery of economic activity.

Despite these specific explanations, February's inflation rate shows there is still much to do. Our scheme is designed to trigger mechanisms for mitigating the effects of inflationary surprises, but Februarys rate calls for additional actions. Hence, I will announce the measures that will strengthen the current monetary scheme.

Let me stop for a minute to explain a rather technical, but relevant, issue of the current scheme. Our monetary scheme triggers mechanisms for counteracting rises in inflation. This means that the interest rate rapidly responds to changes in the monetary market conditions, as we have seen in the past few weeks. Then, if there is an increase in inflation, inflation expectations or risk perception, agents demand a higher interest rate to stay in pesos. This is rapidly reflected on the rate of liquidity bills (LELIQs) auctioned. The swift reaction of the rate, which is at the core of this scheme, helps to reduce foreign exchange rate volatility and to increase the contractionary bias in the event of inflationary surprises.

The current scheme, strengthened with the measures that I will shortly announce, will reduce inflation along this year. This process will become consolidated in the coming years. I understand that such statement may be viewed with skepticism, as inflation in Argentina has been high for long.

Let me recap some ideas I have recently proposed. Inflation in Argentina was higher than 20% annually in 12 out of the last 20 years, and below 10% in just 17 of the past 75 years. Today, Argentina has the highest inflation rate in the region, excluding Venezuela, which is undergoing an unprecedented crisis.

Even though these figures can be frustrating, we should not be disappointed. The remaining Latin American countries, having low inflation at present, have gone through long periods of high inflation and managed to beat it. Take Brazil, Chile, Colombia, Mexico, Peru, and Uruguay. Let us consider the time when they managed to achieve a permanent inflation rate below 10%. These countries had recorded average inflation rates exceeding 20% in 14 out of the previous 20 years. They ultimately made the change through sound macroeconomic policies as the ones we have been implementing in Argentina.

I would also like to explain why inflation in Argentina will go down on a sustainable basis. When I speak about sustainable basis I mean following a tight monetary policy as the current one, based on three pillars: fiscal balance, foreign trade balance, and undistorted relative prices.

We will reduce inflation without taking any shortcuts or measures that are only effective in the short term but cannot be sustained or else are damaging in the medium term. The foreign exchange rate has usually been frozen as a shortcut to lowering inflation. We are not going to do this because we are familiar with the resulting foreign imbalance.

Another shortcut used in Argentina consisted in having regulated prices of goods and services, such as those of fuel, electricity, gas, or transport. By artificially lowering some prices, inflation is contained in the short-term. Meanwhile, however, an unsustainable imbalance grows: the use of these services and goods is encouraged in a manner that is not in line with their real cost for society; investment is discouraged; and supply falls as well as the quality of the service in question. You may all know how unsustainable the fiscal cost of these policies is.

The previous administration used both short-term strategies at the same time: exchange rate and price lag. This mix of policies temporarily controlled inflation by 25% in 2015, but laid the basis for inflationary acceleration.

A common characteristic of most attempts at controlling inflation in our country is that they coexisted with high fiscal deficits, which eventually made the BCRA bridge the gap. Sooner or later, the ensuing monetary issuance produces inflation.

We have been working on adjusting these macroeconomic imbalances in the past 3 years.

At present, the real foreign exchange rate is around 60% higher than before the date foreign exchange restrictions were lifted. The current account deficit of 2018 4Q (in seasonally-adjusted and annualized terms) was 1.2% of GDP, 3.8 p.p. down against 2017.

The rate lag has been virtually adjusted. The greater part of the effort that means adjusting utility prices has already been made.

Naturally, if a lag in foreign exchange rate and utility prices has short-term effects on inflation, adjustments will in turn cause a temporary rise in prices. However, these adjustments are necessary to lower inflation permanently.

In monetary terms, we set into motion a strict scheme to control the amount of money in line with the macroeconomic context described before. Regarding Februarys inflation, the Monetary Policy Council (COPOM) took measures today to reinforce this scheme even further:

1. Expand the monetary base zero growth target until the end of the year.

2. 2. Continue overcomplying with the monetary base set in February on a permanent basis.

4. Establish that the floor and ceiling values of the foreign exchange non-intervention range will increase to 1.75% monthly during 2019 Q2.

Based on these measures, the monetary base target at the end of the year will be 10% lower than the figure originally released.

Furthermore, the Executive will send the Congress a bill to reform the BCRA Charter in the coming weeks with a view to enhancing our monetary policy institutionality. There follow the main amendments included in this bill:

1. Make price stability the main objective of the BCRA. Even though we have clearly explained that reducing inflation is a priority for the BCRA, price stability should become this institutions prime mandate.

2. Prohibit the BCRA from financing the Treasury. Though this is already happening, it is important that, in institutional terms, this prohibition be enshrined in a law as significant as the BCRA Charter.

These measures enhance our monetary system and institutionality. We are working to reach sustainable disinflation.

To be honest, I must admit we have not reached this stage as planned. The conditions to lower inflation over these three years have been harsher than expected.

All efforts made are about to pay off. Hence, it is key to keep monetary discipline. The imbalances that prevented inflation from dropping in a sustained way in the past have been or are about to be solved. We have been implementing a monetary policy aimed at reducing inflation. We must now be persistent and aware of the fact that this policy yields no immediate results; however they, no doubt, will come up. This is shown in our neighboring countries, which are already used to having one-digit inflation rates. I am confident we will do it as well.