Currently an icon of the City of Buenos Aires, the premises of the Central Bank of Argentina have a rich architectural history. They comprise several linked buildings located in the block bounded by San Martín, Reconquista, Teniente General Perón and Sarmiento streets. There is another building at San Martín 216, on the adjacent block. Indeed, a series of buildings have been acquired along nearly four decades, spanning various architectural styles.

The Central Bank was founded in 1935 and started operating in the building located at San Martín 275, where the former Banco Hipotecario de la Provincia de Buenos Aires had previously had its headquarters since its construction in 1872. In 1937, the back of the building was partially refurbished, and a new facility was built in the center of the block, which later became known as the central building.

In 1940, another building was erected at Reconquista 266, thereby connecting the two sides of the block. It was then identified as the new building of the Central Bank.

Other facilities have been put up since then. By 1985, the Central Bank premises were composed of seventeen buildings with a covered area of about 60,000 m2 (approximately 646,000 sq ft). Currently, most of them no longer belong to the institution. Finally, the newest building was opened in 2001 under Roque Maccarones administration. This new facility located at Reconquista 250 is home to the Superintendence of Financial and Exchange Institutions. 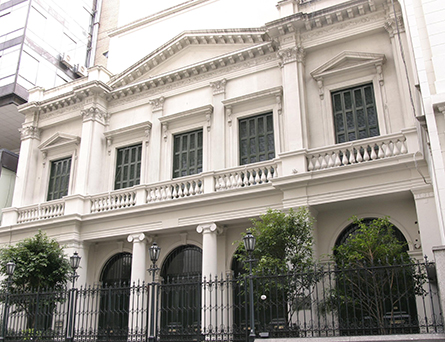 It was designed and built by architects Enrique Hunt and Hans Schröeder as the headquarters of the Buenos Aires Stock Exchange. The original building dates back to 1862.

Hunt and Schröeder were pioneers in Argentine bank architecture. They were in charge of the construction of Banco de Londres (1867), Banco de la Provincia de Buenos Aires (1874)both of which have been pulled down,and Banco Hipotecario de la Provincia de Buenos Aires (1876) located at San Martín 275, currently one of the premises of the Central Bank.

As an example of the Italianate style, the San Martín 216 building is two stories high and has a huge hall with a double height ceiling which could be reached through another hall flanked by colored-glass doors. Buyers and sellers would meet there for carrying out stock transactions.

The façade is the most distinct feature of the building. It is set back from the front property line and enclosed by an impressive, clearly symmetrically-patterned iron railing.

From 1935 to 1942, the building was used by several state-owned banks, and then handed over to the Central Bank. 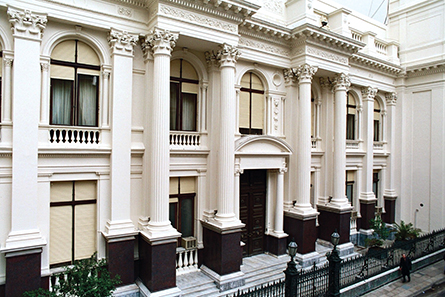 Enrique Hunt designed this building which was originally intended as the headquarters of Banco Hipotecario de la Provincia de Buenos Aires. It is the oldest bank construction still standing in the City of Buenos Aires.

Construction works took four years, ending in 1876. This is a typical building of the late Italianate style, with much more ornamentation than the building located at San Martín 216, and an impressive façade supported by columns and pilasters.

Anyone in the central hall can see a gallery with the portraits of the Central Banks former governors over the balustrade on the first floor.

Throughout its history, the building housed various national institutions, such as the Supreme Court and Caja de Conversión. 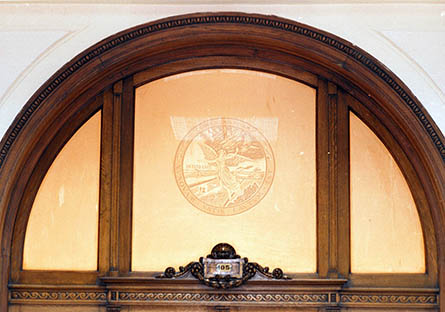 Gino Aloisi designed the project of the San Martín 235 building for La Inmobiliaria insurance company, which opened in 1920. Monumental, and at the same time fine-drawn and eclectic, this facility was also built in an Italian Renaissance style.

The building displays a variety of cornices, balustrades, coats of arms and frontispieces. It was bought by the Central Bank in 1946, the ground level being refurbished in 1960 for operational reasons. Remodeling works involved the façade, and the original portico was removed. 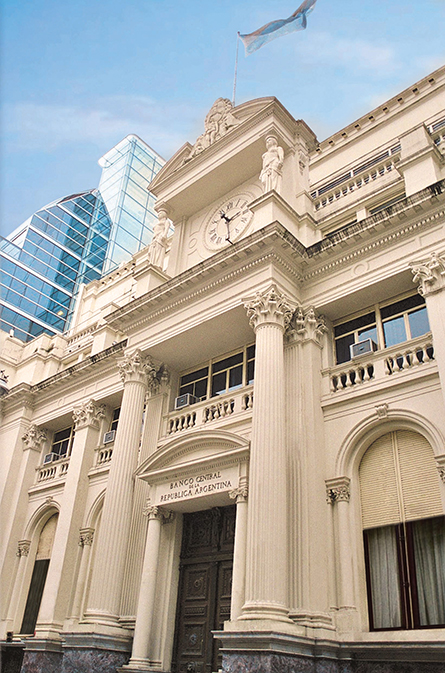 Upon the foundation of the Central Bank of Argentina in 1935, the authorities adopted the resolution to construct the so-called central building, which can be accessed from the hall of the San Martín 275 building.

The building, designed by architects Eduardo Lanús, Federico Woodgate and Enrique Lanús in rationalist style, has free plans and a compact circulation core.

At the same time, the Central Bank acquired the plot located at Reconquista 266 behind the San Martin 275 building to erect new premises, the construction works of which ended in 1940. Thus, the new Central Bank building was linked to the original premises of Banco Hipotecario de la Provincia de Buenos Aires by passageways. 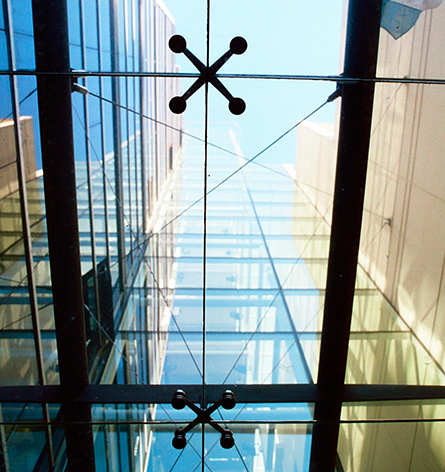 The Central Bank bought this plot from the Anchorenasa traditional family in Argentinain 1944 and used it as a parking lot for many years. In 1993 the Board of Directors decided that a new building would be attached to the existing premises. Five years later, a nationwide architectural design competition was held for that purpose, which was won by the firm Romero-Di Tata. During excavation works, the original cistern from the 19th century was unearthed in perfect condition. Such valuable finding resulted in a Rescue Archaeology Project of the University of Buenos Aires led by Daniel Schávelzon, which enabled to protect material evidence of the then neighborhoods everyday life.

The new building was opened in September 2001 during Roque Maccarones administration, and houses the Dr. Raúl Prebisch Library, the Numismatic Issuances stand and the Superintendence of Financial and Exchange Institutions, among others.