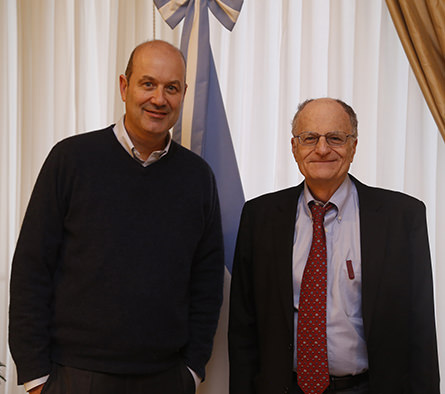 Federico Sturzenegger had a meeting with Thomas Sargent where they talked about the economic global situation and the Argentine situation in particular and they analyzed the last Central Bank´s measures regarding monetary policy.

Thomas Sargent is one of the most prominent macroeconomists in the history of economic discipline.

He received a Nobel Prize in Economics together with Christopher Sim in 2011. He has a Ph.D. in Economics at Harvard University, taught in the United States leading universities and he is currently a Professor in New York University. Moreover, Thomas Sargent´s contributions to the understanding of the dynamic characters of economies and the expectations crucial role in explaining their macroeconomic performance have been and continue to be- huge. In addition, he contributed to the understanding of fiscal sustainability for price stability.