By Miguel Ángel Pesce I President of the BCRA

The BCRA has basically four monetary liabilities: money in circulation, deposits of financial institutions at the BCRA, repos using government securities, and liquidity bills (LELIQs). If the BCRA did not act as monetary regulator, its monetary liabilities would be reduced to the first two. In countries with developed local capital markets and whose credit to the public sector is normalized, central banks make open market transactions (purchase/sale of government securities) to regulate the interest rate and the amount of money. The objective of the BCRA is to progressively conduct monetary policy using those means.

At present, they are used by the BCRA in its role as a regulator to prevent interest rate volatility and loss of value of Treasury debt securities in pesos. This also impacts monetary policy instruments, which are used to manage the levels of liquidity in the economy.

Contrary to what it might be intuitively thought, the Argentine economy has a great capacity to generate economic surplus or savings. However, it has been used in the past for the build-up of foreign assets, which is a paradox in a country that needs to grow and create jobs, and is impractical in a context of high level of imports and no access to external credit. It would be logical for such savings to be channeled to productive investment, given that, due to external restriction and energy supply constraints, the possibility of growth has been limited by factors other than financing. As a result, the economic surplus generated each year is currently accumulated in bank deposits.

If the BCRA did not intervene in the money market, the excess of deposits over the demand for credit would cause the interest rate to collapse significantly below inflation, wiping out Argentine savings and deepening distrust in the national currency as a store of value. Thus, the BCRA absorbs such excess liquidity and sets the interest rate to safeguard the value of Argentine savings. This is achieved by way of two of the monetary tools already mentioned: repos and LELIQs. The remuneration on such instruments tends to compensate the deterioration suffered by the currency in the inflationary process and these resources are expected to turn into financing through the demand for credit.

For the past three years, the stock of monetary instruments has stood substantially below the maximum levels reached in March 2018, both when adjusted for inflation and in relation to GDP.

In July 2022, the stock of such instruments was around ARS6.89 trillion, 23% below the maximum level reached in March 2018 when the stock of BCRA's liabilities (at that time, LEBACs) at current prices (July 2022) amounted to ARS8.95 trillion. 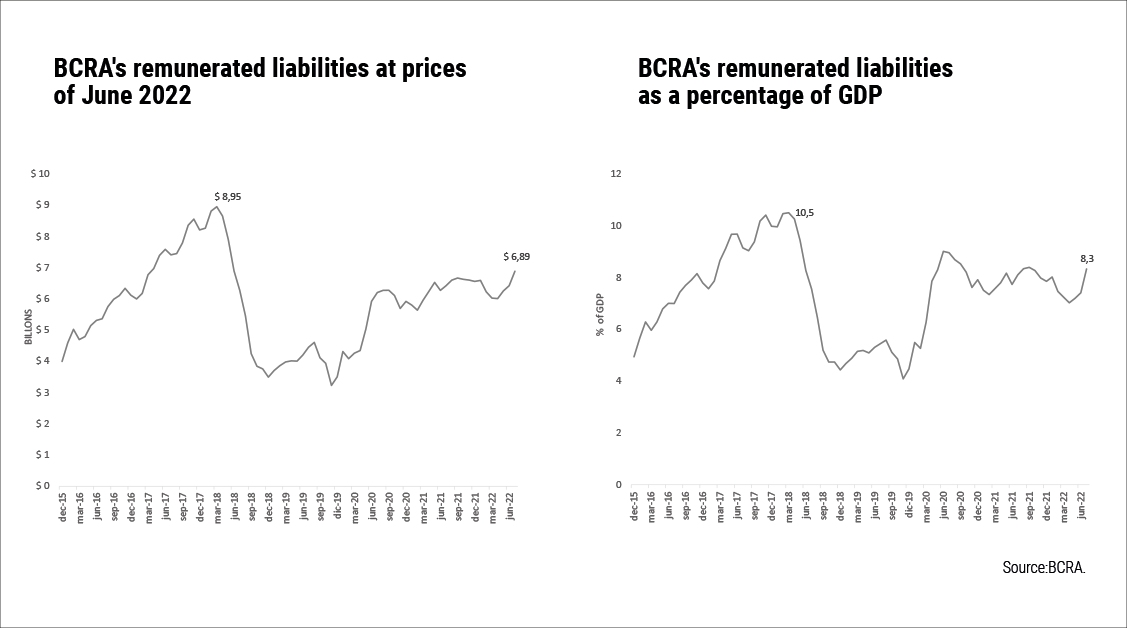 The measure in GDP terms ratifies the results: those liabilities averaged 8.3% of GDP, whereas the highest record was 10.5% of GDP in March 2018, i.e. 2.2 p.p. up against the present figure.

The growth in the second quarter of 2020 exclusively represents the monetary management efforts required by the issuance needed for providing assistance during the pandemic, in an economy with no access to external credit and shallow financial depth.

More recently, in June and July, an increase in the BCRA's remunerated liabilities was observed as a result of the monetary authoritys intervention in the Treasury debt market. As it was mentioned, the records of the month stand substantially below the previous maximums. In contrast to what happened with issuance for assistance during the pandemic, the circumstantial increase in remunerated liabilities brought about by open market transactions on Treasury securities caused the BCRA's balance sheet to incorporate instruments that were acquired under more favorable price and yield conditions than those of the BCRAs remunerated liabilities issued to manage the amount of money.

In this way, such instruments play a substantial role in relation to the savings of Argentine companies and households. The BCRA promotes the development of the capital market to channel these savings, but in the meantime, yields on liabilities enable financial institutions to remunerate depositors, thus relatively preserving their savings. In order to ensure an adequate transfer of yields, the BCRA implemented a scheme of mandatory minimum benchmark interest rates for deposits.

The objective of these instruments has not always been the one explained. Particularly, the current situation contrasts significantly with the one existing between 2016 and 2018, not only considering the levels reached. At that time, within the framework of exchange rate liberalization and financial deregulation policies, resident and non-resident investors were allowed to acquire BCRA's debt instruments. Such decision implied a denaturalization of the BCRAs debt securities as instruments of monetary regulation. Back then, they began to be used by non-regulated investors for carry trade strategies

Between the end of 2017 and the beginning of 2018, LEBACs that were not held by institutions regulated by the BCRA represented two thirds of the total, with holdings amounting to USD42,500 million. BCRA estimates indicated that more than a quarter of this amount, around USD11,000 million, was held by external investors. In this context, the role of monetary policy instruments was distorted.

By the end of March 2018, the decision of those external investors to put an end to their carry trade strategies with the BCRA's debt instruments influenced local investors, who also demanded dollars while selling their holdings of LEBACs. The accelerated unwinding carried out by unregulated investors triggered a foreign exchange and debt crisis, which began at the end of April 2018.

In this sense, foreign exchange regulations are also a factor to consider when measuring the implied risk of the stock of monetary policy instruments. At present, the exchange controls in force, established towards the end of 2019 in the context of the balance of payments and debt crisis, set a real limit to the foreign exchange risks of the stock of BCRA's remunerated liabilities.

Three factors, therefore, clearly indicate a decrease in systemic risk compared to the situation in 2018:

 Current levels turn out to be lower.

 Foreign exchange controls in force limit the risk of potential unwinding of positions.

As indicated before, unlike what happened in the 2016-2018 period, these instruments currently serve monetary regulation purposes only, seeking to preserve the value of depositors savings in an inflationary context.

The successful reduction of the BCRA's stock of remunerated liabilities will not be achieved through their loss of value or by building up foreign assets, but through the development of a financial system and a capital market, which will ensure that increasing portions of national savings are channeled to investments for development and job creation.