A $2 commemorative coin will be distributed among financial institutions for circulation as from next Monday.

Thus, 200 million of commemorative coins will coexist with such bills and coins of the same value as are currently in circulation. 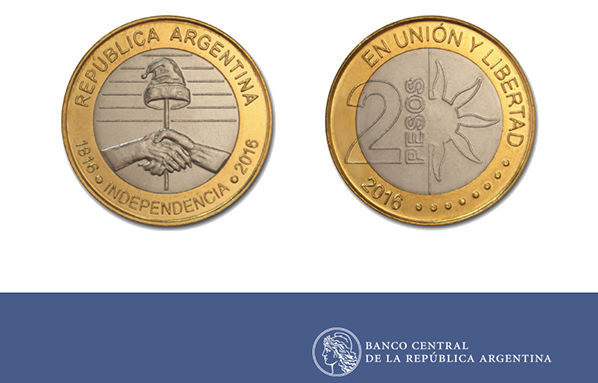 This coin has been designed by this Central Bank and minted by Argentina's Mint House. It is identical to the 2-pesos coin that is already in circulation. Its characteristics features are as follows: 7.2 grams (weight), 24.5 millimeters (external diameter), 17 millimeters (core diameter); ring alloy: copper (92%), aluminum (6%) and nickel (2%); and core alloy: copper (75%) and nickel (25%).

It is a bimetallic coin with a golden ring and silver core. The main features of its design are, namely: a pike topped with a Phrygian cap standing for the defense of the nation; and two hands clasped together signaling unity and fraternity among the people of the United Provinces of the Río de la Plata (obverse). The upper part of the ring reads REPÚBLICA ARGENTINA , and the lower part 1816 *INDEPENDENCIA*2016 in reference to Argentinas bicentennial Anniversary.

In turn, on the reverse, together with the face value of two pesos, a stylized picture of the sun on the epaulette of the military uniform of the General Don José de San Martín can be seen. Lastly, inside the ring, the motto EN UNIÓN Y LIBERTADcan be read. It was used in the first national coins minted by the Assembly of the year 1813 during the Independence War.

Our Central Bank seeks, through this commemorative coin, to pay homage to Argentinas patriotic forefathers who devoted their lives in pursuit of its Independence on July 9, 1816.