The BCRA Publishes the First Report on Financial Inclusion

November 22, 2019. The BCRA has published the first biannual Report on Financial Inclusion (IIF, in Spanish), which seeks to disclose the development of financial inclusion in Argentina and the measures adopted in this regard, and to discuss the progress made in financial inclusion as monitored by means of specific metrics. On the basis of international experience, this report analyzes the development of the indicators that assess access to, use and quality of, financial services in the December 2015-March 2019 period.

The IIF is the result of efforts undertaken at institutional level to contribute to the assessment, analysis and exposition of the challenges of financial inclusion in Argentina. In turn, the BCRA has introduced some changes in its regulatory framework with a view to fostering new points of access to bank accounts; streamlining the process for opening bank accounts; promoting greater use of electronic means of payment; and encouraging transactions through electronic channels.

In the period analyzed, there was a higher level of access and usage, with improvements in bank infrastructure, electronic transactions, and savings instruments. Quality indicators also showed positive results in the financial education programs implemented by the BCRA. However, there are still further challenges to face. Moving in this direction, we are investing efforts to solve the inadequate numbers of points of access in certain areas of the country, to encourage greater use of electronic means of payment, to increase the rate of penetration of credit cards among the adult population and smaller size enterprises, and to considerably improve financial education across Argentina.

-The infrastructure of the financial system increased its volume, with a rise of 22% in total points of access to financial services in absolute terms (29,228), and of 17% in relative terms in the rate of penetration among adult population from the beginning of 2016 to March 2019. ATMs have contributed the most to the expansion of PDAs with a 29% increase.

-During the last few years, there has also been an increase in the ways of withdrawing cash with debit card through points of sale in shops and non-bank collection networks. As of March 2019, withdrawal points represented at least 50% of total ATMs and 2.5 access points every 10,000 adults, thus improving access in the country.

-Argentina reported that 80% of adults have, at least, one deposit account, either savings account or current account, in a regulated financial institution as of March 2018. This figure can be considered high for a shallow economy as ours. In countries with high income, the penetration rate of a basic bank account is 95%, while in jurisdictions with medium-high income, as rated by the World Bank and in which group Argentina is included, this indicator is nearly 73%.

Usage aspect | It seeks to assess the extent to which financial services and products are used.

-As regards loans channeled to the manufacturing sector until August 2018, 40% of micro enterprises (as legal persons) had obtained a credit line in the financial system, while 52% of them had some type of financing during a 12-month period. As for small and medium-sized enterprises tranche 1, 74% and 76% of them, respectively, had obtained loans from September 2017 to August 2018.

-As to transactions carried out by natural persons through electronic means of paymenti.e., debit and credit cards, transfers and prepaid cardsthey totaled 5.3 per adult (monthly average) during the first quarter of 2019. International figures show that the use of these means of payment is likely to expand.

Quality aspect | It stands for clients' satisfaction and to their degree of understanding of financial products.

-The global index of financial education summarizes the adults degree of financial knowledge, behavior and attitude. In 2017, Argentina reached an average of 11.5 over 21 points, which meant a rather low value at an international level.

-To face these challenges, the BCRA is carrying out different programs that seek to promote, from elementary education, financial capabilities for everyday life and achieve an adequate inclusion for the fair use of financial products and services. As of March 2019, the programs Learning How to Save Money (since 2016) and Financial Skills for Life (2017) have been presented to 18,070 students in secondary schools.

-Effectiveness in lending channels within the financial system in cities with at least three branches of different banks remained unchanged from December 2015 to March 2019. These cities represented 8% of the total and included 75% of the adult population. 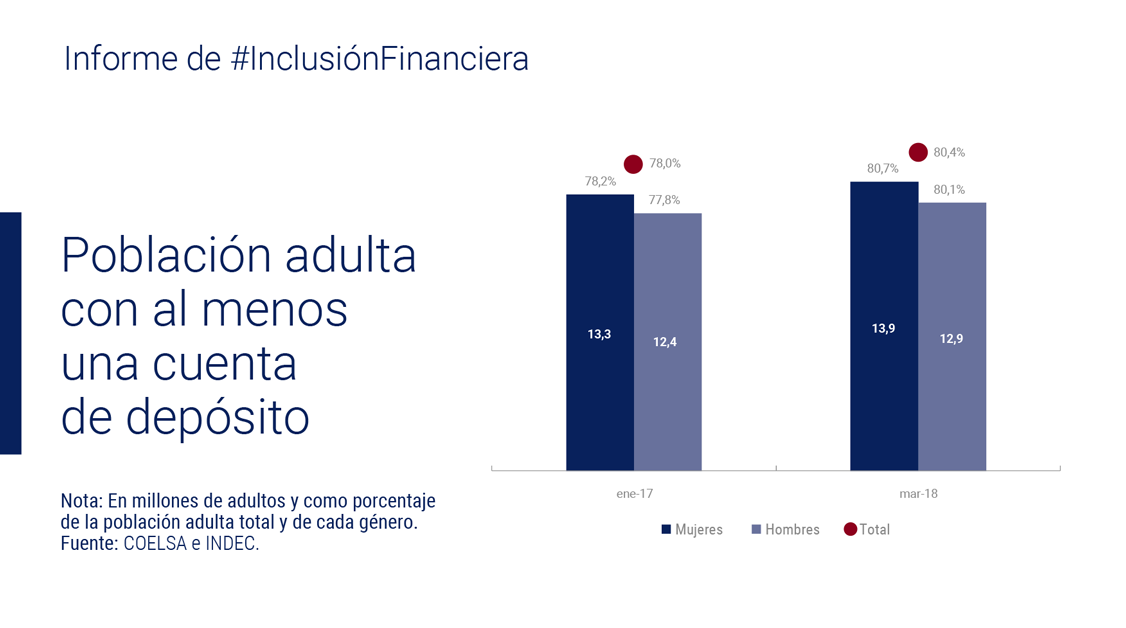