The BCRA launches the 200-peso bill

The Central Bank of Argentina launches the 200-peso bill featuring the Southern Right Whale on October 26, 2016. This is the second banknote of the new series Argentinas Native Fauna which portrays a vertical design on the obverse as a new way to raise consciousness about environmental protection. The first banknote was the 500-peso bill featuring the Jaguar and started to circulate in June 2016.

The 200-peso bill, made of 90 g/m2 cotton paper in a blueish color, has the size of the Peso Series. This bill will be introduced today through bank branches and ATMs along the country. 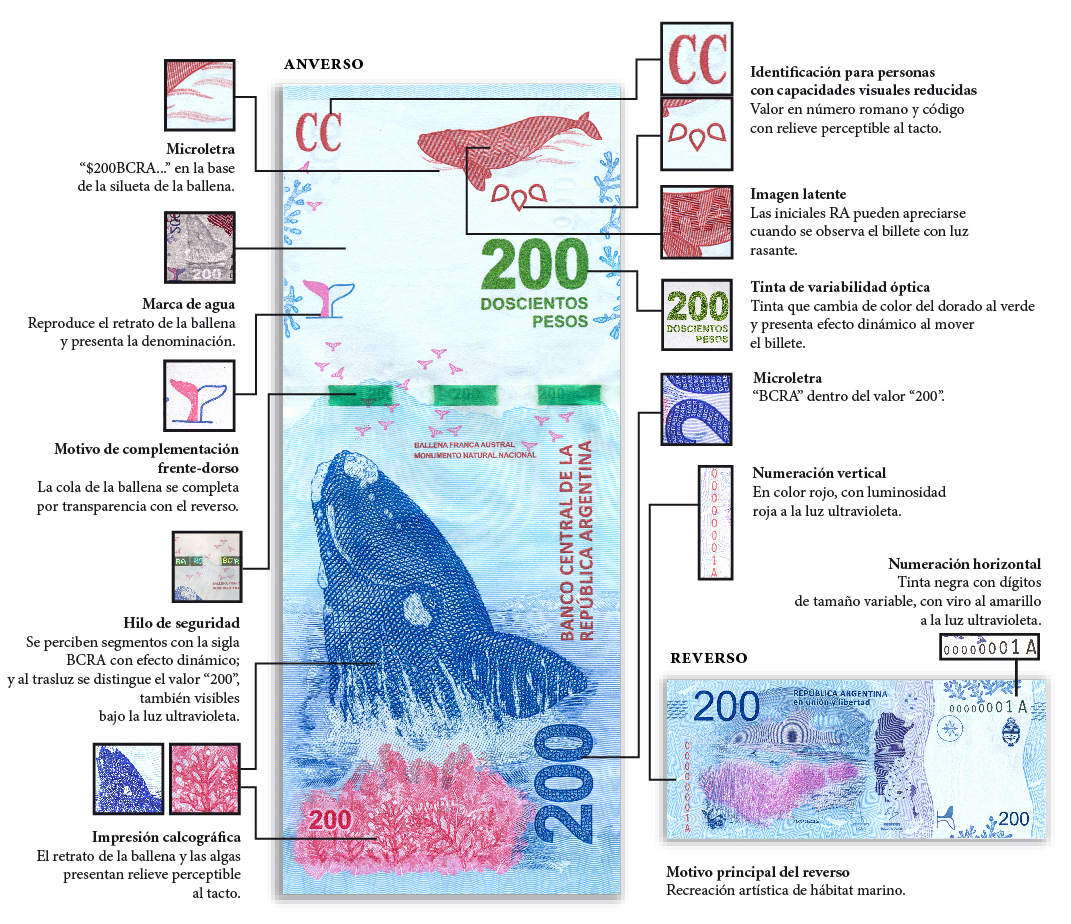 The Southern Right Whale is the representative creature of the Argentine Sea, Antarctica and South Atlantic Islands, and is considered a National Natural Monument since 1984. More than 4,000 whales approach the Puerto Madryn coast between May and December.

The new bill, with blue as the prevailing color, has strict security measures such as watermarks featuring the southern right whale and the number 200, fibers becoming fluorescent under UV light, and a security thread which is made visible by changing from garnet to greenish yellow.

The obverse of the bill portrays a vertical layout of a southern right whale and the reverse shows an artistic recreation of the whales habitat on a horizontal position. Moreover, at the bottom left-hand corner there is a shadowed image of the Southern Right Whale, standing for a toy that winks at a child in an attempt to raise the consciousness of next generations. The Central Bank of Argentina views the design of the national currency as a meeting point where Argentinians may contribute to reunion when it comes to honoring our country, and our fauna, thus causing everyone to commit with the environment, joy and life.

The new 200-peso bill was presented today at Mar Patagonia Ecocentre in the city of Puerto Madryn, Chubut, among prestigious figures such as Federico SturzeneggerGovernor of the BCRA, Mario Das NevesGovernor of the province of Chubut, Ricardo Sastre Mayor of Puerto Madryns Town Halland authorities of the Argentine Mint, NGOs representatives related to environmental care and numismatic experts.

The new 200-peso bill will improve daily economic activities in conjunction with the measures that the Central Bank implemented in the past few months such as new channels of paymentby mobile phones, electronic checks depositand the opening of free saving accounts and related credit cards, and transfers by electronic means for natural persons.