The AR$500 banknote featuring a jaguar image was launched on June 30, 2016, thereby beginning the new set of banknotes containing images of native fauna pertaining to several country regions. By choosing this image, the BCRA wishes that the national currency be a common point where all Argentinians may fell represented while it raises awareness of the biodiversity and environment protection.

The new note, made of 100% cotton paper in a greenish colour and with the same size of the Peso Series, was distributed progressively starting on June 30 through the network of bank branches and ATMs across the country. Like the rest of the new notes, it will coexist with those currently in circulation.

The selection of a jaguar results from the fact that it is deemed a National Natural Monument, one of the most important categories in terms of preservation as it is a critically endangered species. Around 250 jaguars have been calculated to exist in our country, particularly in the northeast, in the Misiones rainforest, and in some areas of Chaco, Santiago del Estero, and Formosa; they may also be found in the warm valleys of Salta and Jujuy.

The note has a vertical shape and, on its obverse side, it is possible to the illustration of a jaguar. The reverse side, which has a horizontal shape, shows the image of the forest, its natural habitat. On the bottom left-hand side corner there is a simpler picture of a jaguar aimed at appealing to children in an attempt to raise awareness in new generations. Green is the prevailing colour and the note also has strict security measures such as: a watermark that shows a jaguar and number 500, fluorescent fibres under UV light as well as a security thread that changes from green to blue. 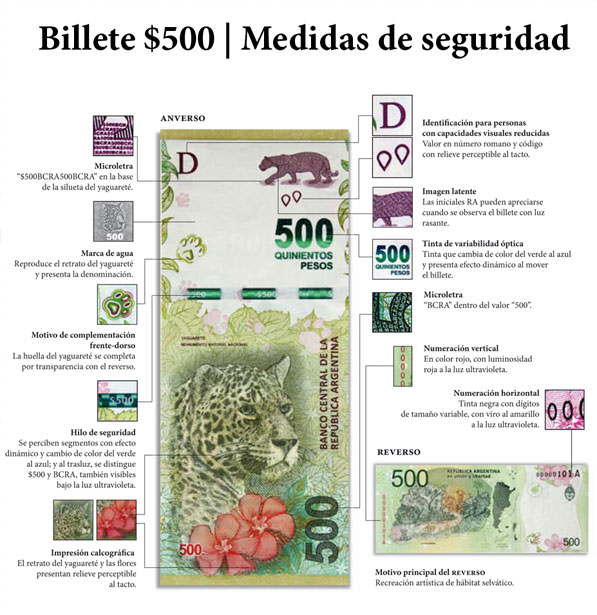 The launch of AR$ 500 notesthe highest value in Argentinas economymakes it possible for the note to increase its purchasing power as well as its relative value measured in terms of foreign currency. Additionally, this note will also facilitate a suitable replenishment of ATMs and a reduction in costs (from 5 to1) and cash movement distribution time. It will also speed up many daily transactions improving Argentinians quality of life.

The new note was presented during a ceremony held on June 29, 2016, at the BCRAs Museum. Some of the attendees were the Minister of Environment and Sustainable Development, Sergio Bergman, representatives on NGOs related to the protection of the environment and experts in numismatics, amongst other special guests. During the presentation, the Governor of the BCRA, Federico Sturzenegger, underscored the six key ideas accounting for the new banknotes: 1st: To celebrate life rather than death. 2nd. To focus more on the future than the past. 3rd. To shift from solemnity to happiness. 4th. To restore federalism. 5th. We are more than just men and women. 6th To join all Argentinians together.

In addition, he stated: We want our national currency to contribute to honoring our country and our wildlife, and to strengthening everybodys commitment to the environment.

The improvements in the operation of daily economic activities that will result from the AR$500 note are also supplemented by the development of electronic means of payment, one of the main objectives of the BCRA. Several measures have been taken in this regard in the last few months such as ordering that savings accounts and their related debit cards be free-of-charge, as well as electronic transfers made by natural persons and the implementation of new methods of payment via mobile telephony.