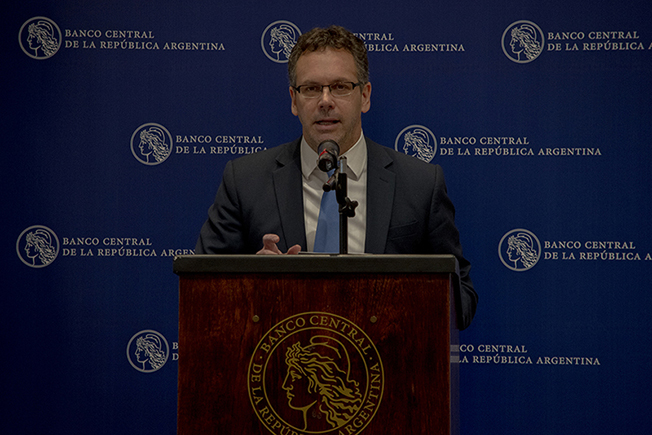 Good morning. I have called you to share the viewpoint of the BCRA at this time of high financial volatility and to confirm the course of the monetary policy.

We are conscious that uncertainty at present causes difficulty and distress in people.

Nominal and financial stability, both for the electoral time and for the time after December 10, is our priority.

Last week, there was an overall adjustment on the price of Argentine assets. In fact, last Monday, before the opening of the forex market, the country risk had already doubled. The fluctuation of the Argentine peso went hand in hand with the rest of the assets.

In response to this, the BCRA immediately drew on different tools of its monetary and foreign exchange scheme. This way, the BCRA succeeded in making the peso start to level off by midweek.

We aimed at mitigating the impact of financial flows on real economy.

I would like to explain in detail the measures taken by the BCRA last week. Firstly, there was more liquidity absorption, which resulted in an increase of the interest rate on LELIQs by 11 p.p. Commercial banks shifted this increase onto time deposit yields. We will go on absorbing pesos in line with our monetary base target.

Secondly, and for the first time since the launching of this new monetary scheme, the BCRA sold USD500 million in the forex spot market. These sales provided liquidity when the market needed it most. Non-sterilized sales further restricted liquidity in pesos. We will continue intervening as long as the foreign exchange market conditions so require.

Thirdly, we adopted a new regulation in order to limit leverage in the foreign exchange market by banks through derivatives transactions. In practice, this resulted in a drop of the financial institutions net demand for dollars.

During the week, the use of BCRA reserves prompted a lot of discussion.

I would first like to make clear that international reserves are mainly intended to moderate exchange rate volatility and ensure stability in the financial system.

As it has been clearly evidenced, international reserves will not be used to preserve the price of financial assets, drifted away from economic grounds.

The BCRA will continue following a restrictive monetary policy and foreign exchange interventions as key tools to moderate nominal volatility.

I would also like to refer to the Argentine financial system. More than 15 years ago, the BCRA adopted a regulation that divided the banking system into two segments, one in pesos and the other in dollars. Since then, this regulation has been adopted by BCRA consecutive administrations. Today, we are facing a system that remains solid despite exchange rate fluctuations.

In the dollar segment, banks have a rock solid and liquid position. More than half of deposits are kept at the BCRA, fully available to institutions. And the rest of dollars are held in banks or have been lent to exporters without any exchange risk.

Regarding the segment in pesos, and as I said some other times, the level of deposits is relatively low in historic terms. This confirms our diagnosis that the potential demand for dollars is limited. In fact, the performance of time deposits has been positive through the program. Moreover, they were renewed as usual last week.

I have not mentioned inflation, yet. We must be realistic. The recent increase in the exchange rate will have a negative impact on prices. The disinflation process of the last four months, reaching 2.2% in July, will be interrupted. Inflation will expand in August and September.

The monetary aggregates scheme has already proved to be effective to anchor expectations once again after turbulence episodes occurred.

However, the scenario has changed and the months to come will be challenging. We are aware of the uncertainty that the electoral process brings about. The measures we took last week tended towards mitigating the impact of financial flows on real economy. We will keep on making any necessary adjustments to achieve this objective and take the path towards inflation reduction once again.

The Central Bank is committed to Argentine people. We will go on doing everything within our reach to restrain nominal volatility and ensure financial system stability in a sustainable way.