The BCRA launches the new $20 bill. It has been designed vertically and its obverse side features the guanaco as the representative animal of the Patagonian Steppe. As from October 4, it will be progressively disseminated through the network of bank branches and ATMs across the country and it will coexist with the current bill in circulation with the same face value featuring Juan Manuel de Rosas. The $20 bill made of 95 g/m2 cotton paper in a reddish color has the same size of the Peso Series. The obverse side of the bill portrays a vertical layout of the guanaco with ornamental flowers, and the reverse side shows an artistic recreation of the guanacos typical habitat in a horizontal position. Besides, at the bottom of the left-hand corner there appears a picture of the guanaco as a way of drawing kids' attention. This is the third bill in the new series called "Argentina's native fauna" and its aim is to raise awareness about environmental protection. The first bill of the new series, the $500 bill featuring the jaguar, was launched into circulation in June 2016, and the second was the $200 bill featuring the southern right whale, that started to be in circulation in October 2016. 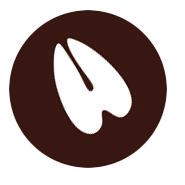 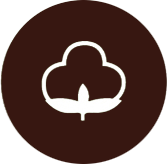 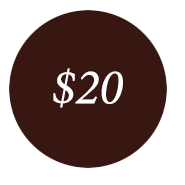 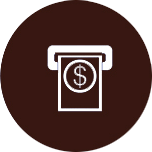 The new bill has strict security features which are as follows: The watermark, among other features, shows the guanacos picture and the face value 20 in a light color, intaglio printingwhere the picture stands out in reliefand a security thread that is a strip made up of squares where number $20 and the BCRA acronym repeatedly and alternately are made visible. 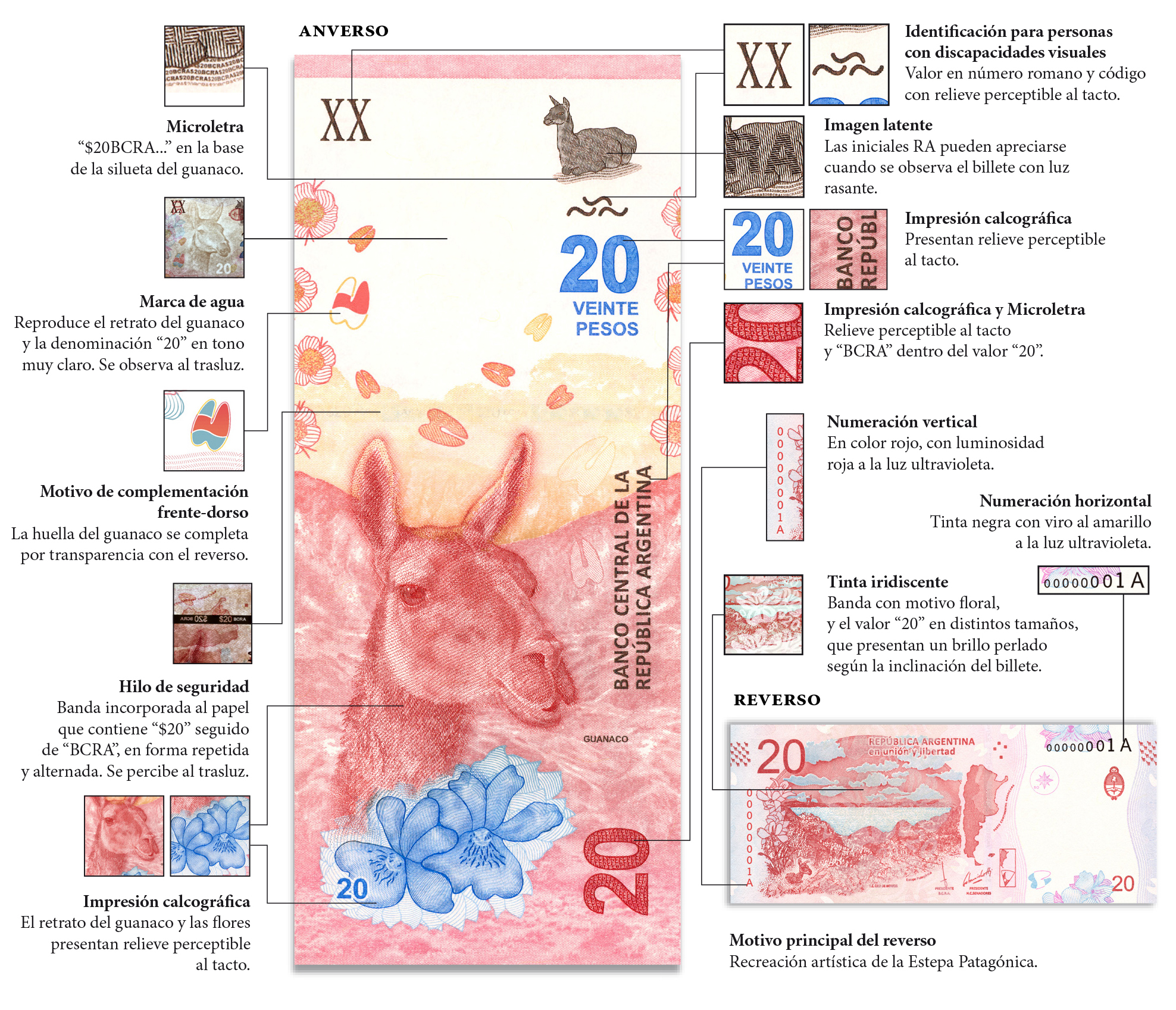 - Watermark: a picture of the guanaco and the face value 20 are made visible when holding up the bill against the light.

- Security thread: a strip in paper money containing number $20 and the BCRA acronym repeatedly and alternatingly is visible when held up against the light. It may be read partially on the obverse and the reverse side. - Offset printing: an iris effect background.

- See-through register: half of the guanaco's footprint printed on the obverse side fits exactly with the other half of the image on the reverse side. - Intaglio printing: a picture of the guanaco, main flowers, texts, numbers, animals silhouette, XX and the code for the visually impaired stand out in relief. - Latent image: the initials RA within the image of a guanaco become visible when the bill is held horizontally at eye level and to the light. - Marks for the visually impaired: the code below the animal's silhouette and the value in roman numbers XX stand out in relief. - Microprinting: the repetition of the legend $20BCRA... at the bottom of the guanaco's silhouette and the acronym BCRA within the 20 face value may only be observed through a magnifying glass, given their tiny letter size.

- Serigraph printing: wide strip with floral motif and the face value 20 in a pinkish-colored iridescent ink. - Series: it starts with letter A. The vertical series is in red color and the horizontal one in black, with variable-sized digits.

Visible when held up against the light

The following characteristics are visible when holding up the bill against the light:

When placing the bill under ultraviolet light, the following features become visible:

The guanaco is a camelid native from South America. They live in all Patagonian provinces: Tierra del Fuego, Santa Cruz, Chubut, Rio Negro and Neuquen. They may also be seen in La Pampa and the south of Buenos Aires. It adapts to different weather conditions; the largest population is found in the Patagonian Steppe. Around 90% of the population  around 550,000 guanacos lives in Argentina.

The new series highlights Argentina's enormous richness and biodiversity. It iconsists of six bills featuring the Rufous hornero, the jaguar, the southern right whale, the taruca, the Andean condor and the guanaco. The obverse side of each bill refers to the image of a typical animal of each Argentine region, while the reverse side depicts the habitat of each species. The new bills remind us that protecting our nature is an essential common task that cannot be waived.

The Central Bank of Argentina views the design of the national currency as a meeting point where Argentinians may contribute to reunion when it comes to honoring our country, and our fauna, thus causing everyone to commit with the environment, joy, and life.

In addition to the BCRA's efforts to enhance the safety and quality of money in circulation, it is actively promoting the development of new digital payments that reduce costs, increase security in transactions, and promote greater financial inclusion.

The impact of the new bills

Taking into account the face value of the billsbefore the new $500 and $200 bills were launched (June and October 2016)$100 bills accounted for 93% of money in circulation, while at present they stand for 60%. The BCRA will spend $734 million in printing higher denomination bills of the new series to satisfy the demand. If the BCRA had only printed $100 bills, the total cost would have been $1.948 billion. Therefore, new bill denominations will allow the BCRA to save 1.214 billion this year.

In 2016, the $500 bill portraying the jaguar won the award Latinum in the contest organized by the Buenos Aires Numismatic Center in the category best banknote. At present, the $200 bill featuring the southern right whale is a finalist in the same category. These awards are aimed at rewarding the quality of design, the technological innovation, and other outstanding features of coins and bills issued across Latin America.