179th Anniversary of the Death of General Güemes 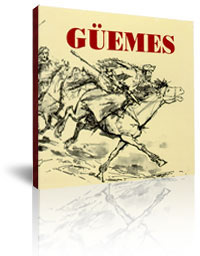 Martín Miguel Juan de Mata Güemes was born in the city of Salta on February 8th, 1785. As a child, he received a good education which he completed with a military career.

The Héroe Gaucho (Gaucho Hero), as he was known, was on top of every mean fight. He openly declared himself a partisan of the countrys institutional organization and defended the Liberty and Independence of Argentine provinces until his death in his native land on June 17th, 1821.

To pay homage to his memory, the Central Bank issued a coin for circulation with similar characteristics to those currently in circulation, and a brilliant uncirculated gold quality coin. It should be noted that this is the first time the Sociedad del Estado Casa de Moneda de Argentina strikes a gold coin in 104 years from its foundation, which is certainly, a landmark.

Part of the coins struck for circulation (5,000) are delivered within a cardboard case with a short bio along with the features of the issuance. The edge of cased coins is reeded, whereas loose coins have a plain edge. 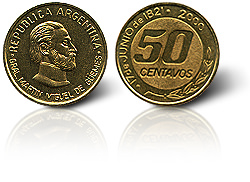 The image at the center is a portrait of the face of General Güemes facing right; the lower arch reads GRAL. MARTIN MIGUEL DE GÜEMES, and the upper arch reads REPUBLICA ARGENTINA (ARGENTINE REPUBLIC).

The center shows the face value in numbers and the word CENTAVOS (CENTS) (incuse like). Surrounding the center, there appear the commemorative date 17 de JUNIO de 1821 (JUNE 17th, 1821), the coinage year, 2000, and a branch of laurel. The coin has a vertical die axis.

The center showsin matt backgroundthe face value in numbers, 5, and the word PESOS (incuse like). Surrounding the center, there appear the commemorative date 17 de JUNIO de 1821 (JUNE 17th, 1821), the coinage year, 2000, and a branch of laurel. The coin has a vertical die axis.