Within the framework of the Bicentennial of the May Revolution, the Central Bank of Argentina issued a silver coin in commemoration of the Argentina - Chile Dakar Rally 2010.

This international sports competition has contributed to bringing countries together. The diversity of landscapes of the different regions of Argentina has captivated competitors and spectators from all over the world. 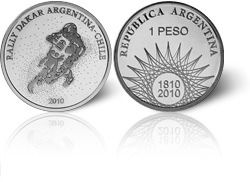 The center shows a moving motorbike evoking the Rally spiritspeed, energy, and frenzy.

The upper arch reads RALLY DAKAR ARGENTINA - CHILE (ARGENTINA-CHILE DAKAR RALLY) and the lower arch reads 2010, year of the sports competition. This coin has been issued within the framework of the commemorative launch aimed at paying homage to the Bicentennial of the May Revolution.

The rising sun appears to symbolize Argentinas ongoing growth. It evokes the 200th anniversary of the May Revolution by including the 1810 - 2010 inscription. The upper arch reads REPÚBLICA ARGENTINA (ARGENTINE REPUBLIC); the lower arch shows the face value, 1 PESO.