80th Anniversary of the Central Bank of Argentina


The Central Bank of Argentina has issued a coin commemorating its 80th anniversary, which replicates the first 50-cent domestic silver coin known as medio patacón. 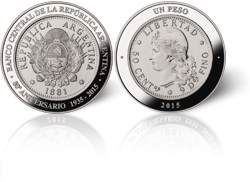 The center of the coin features the Argentine coat of arms, flanked by 14 flags, which symbolize the provincial division existing in 1935. Two cannons enclose the design at the bottom.

The design at the center depicts the effigy of Liberty created by the French sculptor and engraver Eugène André Oudiné. The upper arch reads UN PESO (ONE PESO) and the lower arch, 2015 (year of coinage).

This coin was ranked second in the award known as "Premio LatiNum 2015/2016" in the "Best Collectible Coin" category.