Good afternoon. We have called you today to explain the economic measures announced yesterday.

These measures seek to protect exchange rate stability and savers.

As you know, financial markets have shown high volatility in the past few weeks. Since the primary election (known as PASO), Argentina's country risk has tripled and the exchange rate has increased by nearly 30%. As Argentinians, we all know that this means higher levels of inflation and poverty. This is our major concern.

A presidential election is not expected to generate the level of uncertainty and volatility we have witnessed these weeks. This does not happen in other countries, where ideological differences exist, and are often big, but there is a rough consensus about economic policy.

Building this rough consensus is of paramount importance in our country. One of the painful lessons drawn from the last decadewhen Argentina neither grew nor managed to lower inflation and povertyis that no economic scheme can succeed without a minimal degree of political consensus.

In this sense, principles concerning, for instance, inter-temporal fiscal balance, a healthy currency and a more competitive economy to integrate Argentina into the world should not be jeopardized in each election.

It is very hard for companies to invest, for people to plan their future, and for authorities to lay the foundations for growth and development, if the economic policy of a country swings like a pendulum.

Whoever is elected as president in the upcoming election must work to build that basic consensus. Only then can we dream of a more prosperous future and avoid disruptions derived from a potential change of government.

What do I mean by disruptions? For example, inflation had been on the decrease for four consecutive months before the primary election. Julys inflation rate was 2.2%, whereas the rate for August was projected to be 1.8% based on the preliminary data of the first 10 days of that month. This will not happen, though. As I have recently said, the financial volatility of the past weeks will lead to a rise in inflation in August and September. We know this entails more poverty.

The latest actions taken by the Ministry of Economy and the BCRA aim at reducing volatility to protect our population with all the tools available.

Last week, the Minister of Economy made important announcements in this sense, giving priority to the use of international reserves to preserve monetary and financial stability even if that entails delaying repayment to public debt investors under such difficult circumstances.

The measures adopted by the BCRA last weekend supplement the announcements made by the Ministry of Economy and create an exchange umbrella so that the economy may navigate the uncertainty associated with the elections in the best possible way.

The measures clearly set priorities regarding the use of reserves, seeking to protect exchange rate stability and savers.

Firstly, I would like to clarify that these measures do not affect the following cases:

 Natural and legal persons may continue withdrawing pesos and dollars from their bank accounts.

 Foreign trade continues to develop regularly and travel-related payments have no restriction.

As regards legal persons, there are two major changes. Firstly, exporters must exchange the foreign currency earnings in the domestic market within 5 business days after collection or 180 calendar days after the shipping permit (in the case of commodities, 15 days). Secondly, companies may not buy dollars to be used as a store of value. Let me say this again because it is important: there is no restriction on the payment of imports or recorded debts upon maturity.

I would also like to make it clear that these measures do not replace the tight monetary policy that we have been implementing since September 2018 and that will continue to be in place in the future. These are supplementary measures in a context of great uncertainty.

As I said, Argentina could hardly reach a basic consensus about the development of its macroeconomy. There is a remarkable exception, though, which has to do with the financial system.

More than 15 years ago, the BCRA laid down regulations to significantly limit banks exposure to the public sector and divided the banking system into two segments, dollars and pesos, which proved to be virtually isolated in practice. As a precaution, banks were also forced to maintain very high liquidity levels, much higher than international standards. All the administrations have upheld these principles ever since.

This is an example of a basic consensus that we have managed to build in the interest of savers. Despite the volatility of the past few weeks, Argentina's financial system is sound.

What do I mean by sound? In the dollar segment, about half of deposits are kept at the BCRA, fully available to institutions. And the rest of dollars are held in banks or have been lent to exporters without any exchange risk.

In the peso segment, deposits are stable, and liquidity continues to be high in spite of the exchange rate swings.

On a final note, I am convinced that the measures adopted will make it possible to reduce volatility and thus protect exchange rate stability and savers. 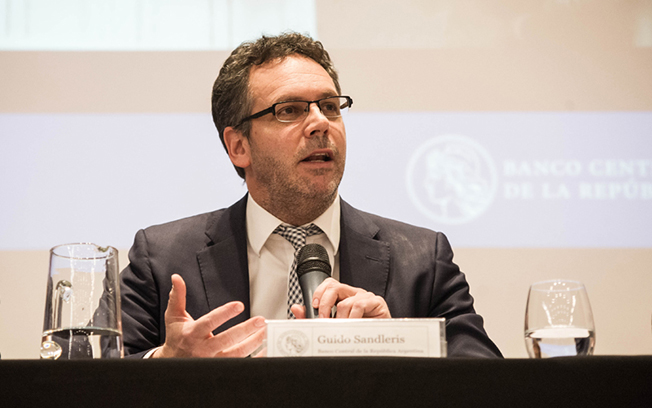