The international commemorative coin programme for the 2014 FIFA World Cup Brazil includes a collection of silver coins. The importance of the programme lies in the fact that participating countries can express their views on the sport. 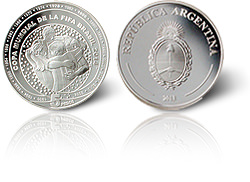 The design at the center depicts a Team Group Hug surrounded by a geometric representation of the public. The hug, chosen as a symbol, embodies the group's team spirit which is also replicated on the bench and on the grandstand.

The center of the coin features the Argentine Coat of Arms. The legend "REPÚBLICA ARGENTINA (ARGENTINE REPUBLIC) is arranged to form the upper arch, and the year "2013" -year of coinage- shapes the lower arch.