Centennial of the Foundation of Comodoro Rivadavia


Comodoro Rivadavia, a port for the shipping of agricultural commodities produced in the interior of our country, was just a small village lying offshore the Atlantic Ocean. It was in 1907, when the discovery of petroleum changed its history for good, giving rise to a cosmopolitan city, full of strength and energy, on the edge of the Patagonian desert.

The Central Bank pays homage to this city on its 100th anniversary by issuing a commemorative brilliant uncirculated quality gold coin.

This coin was designed by a team of professionals from Comodoro Rivadavia composed of Silvia Brun and Laura de la Torre; and visual designers Verónica Godoy, Gerardo Hayes, Liliana Madueño, Verónica Quercia and Javier Rubina. The team drew inspiration from PETROLEUM, WIND, THE SEA AND THE EARTH to consider ENERGY, as an icon and a typical resource of Comodoro Rivadavia, a place which embraces diverse cultures from Argentina and the rest of the world. They sought to convey the idea of progress out of the vastness of the landscape and the increasing population. 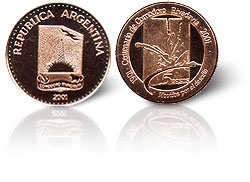